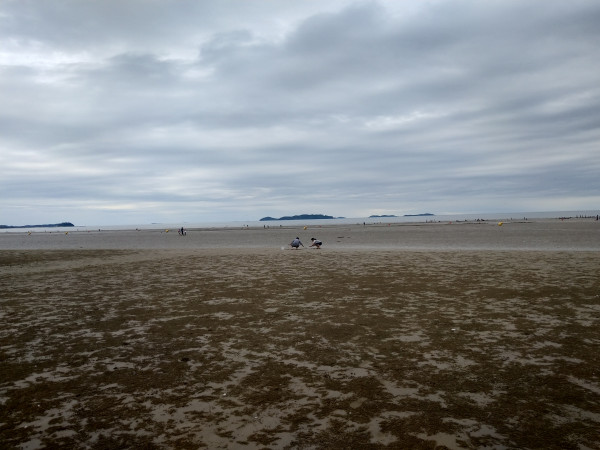 There are numerous direct flights between Hong Kong and Seoul as well as Busan. These are the two biggest cities in Korea with many intercity bus and train routes. We make good use of these routes to go to rural part of Korea. Korea for us is more than shopping, Kpop and good food . It is a beautiful and fun country where we can experience mother nature offerings to the earth.

We flew in Seoul and had it as our base in Korea , where we book a nice hotel so we can leave our bags and have a good shower after our day trip to small town in Korea.

We have always wanted to go to razor clam picking after watching a YouTube clip in how funny the razor clam poping out from a hole in the seabeds. We have been searching online for a good while before our trip and we finally decided to go to Mongsanpo beach in Taean-gun , Chungcheongnam-do, which is on the west side of Korea and also as the part where the famous mud festival city- Boryeong sits on .

The bus trip from Seoul takes three and a half hour . We took the bus from Nambu bus terminal in Seoul ( quite near to the Gangnam area). The bus runs every thirty-five minutes , and there is a very good bakery selling rice flour made buns with different fillings. We bought the bus tickets to Namyeon (the town closest to Monsanpo beach), few buns, some water. We gave the bus tickets for the driver check and get on one of the bus heading to Taean and Namyeon.

The bus is very spacious and the seats are comfortable . We had good nap on the bus, after some two and a half hours on the bus, people start getting off on some stops the bus passed by . Our memorable and funny stories begin when the bus stop in Taean terminal for a good while without moving on to our destination, Namyeon .

We asked the driver when will the bus arrive Namyeon , and the response we get was the most expected one in those get lost plot . “What? ! You are going to Namyeon? Did you really buy the ticket? Why I didn’t know there are guests going to Namyeon ?”, shouted the driver in Korean. My sister got trained up her Korean oral and listening skills, thanks to my many outrageous ideas, bringing our family to the most rustic part of Korea .

After some conversation, we realized that this is not the same driver whom we passed the ticket check to; and that is why this driver didn’t plan to go to Namyeon . Of course, we kept the tickets and showed to the driver, and after some thirty minutes drive, driver told us to get off.

We were so puzzled when the driver asked us to get off, because there is practically no sight of beach, tourist souvenir shops or even a bus stop sign. The driver insisted that was Namyeon. When we asked where and when will the return bus arrive, the driver gave us the most brilliant answer we could ever think of , “You will see the bus to get on when it arrive.” Brilliant enough because there is only one bus going and leaving this tiny place , and of course, no taxi.

We get off , the bus left. Wind blow up sands and dust from the road construction site ahead , leaving us with dashes of yellow sands come along with the wind. I am super excited as this will be the smallest ever place we have been to. This cannot be called a town or village. This is just a place with one police station , one ATM shop , one post office ,one grocery store and one restaurant .

It was noon time when we arrive and we were hungry and urged for a toilet break. We went to the only place which seems to be opened – the restaurant. Opened the door ,the little restaurant got all it’s three table full. When we were about to left, the owner came out tell us there was a washroom next to the police station . We headed to the direction the owner pointed to without finding any toilet.

Right after we left the restaurant , there were a group of men coming out of the restaurant after finishing their meal. They seemed to be surprised by our foreign faces . They we’re even more surprised when they found out we were not Korean . We were desperately looking for the toilet and one of the guy told us ” this and this and that and that are my shops , you can just pop into the Barbara shop and go straight to the toilet inside”.

Thr toilet was also the tinest one we had aever went to . It was a tiny room where behind the door is the one and only toilet bowl. It’s perfectly fine. Functional outstands fanciness in such a scenario.

Those men were curious why we were in the town. We get used for being asked many questions in all our trips to places outside Seoul and Busan . To the men amazed , they were not sure if we could no go any shellfish picking due to the tidal level . I was pretty sure that we can go on shellfish picking , because I had been checking on the beach official page (with my limited koread reading skills) that tidal level are perfect for shellfish picking. They discussed and one of the guy offer us to give us a ride , or otherwise we had to walk for a good thirty minutes to beach side .

The friendly man is running a BnB on the beach side . We had been expecting a beach side like Haenundae, Busan with seafood restaurants around and like Jindo with tourists souvenir shop where they sell long boots and shellfish picking tools. We were wrong . It is just a beach with a gigantic mudflat area .
The BnB owner was so kind to us borrowing the shellfish picking tools, buckets , bottle of salt (to get the razor clam out of the mudflat). He even borrow us flip flops and a place to leave our bags . He didn’t want to get any money from us, nor did he want to sell his BnB room stay to us . Many of the Koreans living in those remote places we have been to are so kind that make us want to explore these remote area again and again.

We headed to the mudflat and it was the first time we have been to such an environment . The muds are sticky and you will sink into it when you stand on a spot for too long . The mudflat is very peaceful to us (huge area with fewer than 50 people finding clams), but not to the sea creatures. We went near the seaside and try to look for small holes. You put salt inside the hole and the razor clams will come out. It sounds easy but reality is not . We have been looking for small holes and only succeed in getting two tiny razor clams . Rest of the time, we were finding very nice white clams underneath the mudflat, and one time , getting a brown big clam size like palm. It was like adult version easter egg hunt. The activity is fit for children and elderly as well.
The clams are very fresh that after our hunting, and that the BnB owner will not accept this as gift , we return the clams back to the mudflat. The clams were finding their ways back into the mudflat quickly. Amazing. I suppose you can cook the clams with noodle and soup if you are living in one of the BnBs nearby or there is a famous camping area nearby as well .

The BnB owner offered to drive us back to the bud stations. We were super hungry and by the time we got back to the places we got off , each of us bought two ice cream. Town buses to Taean arrived and we went to a coffee shop in Taean city before heading back to Seoul .

There was indeed not much information about the razor clam picking on English/Chinese medium webpage. We we’re lucky yo get the mudflat information in Korean blogs. We were so satisfied when the mudflat shellfish picking experience is as interesting as we thought of .

The only down side is that we didn’t fill our stomachs before heading to the mudflat , as otherwise, we will enjoy mudflat activities more with a full stomache . Please do leave the small clams behind and not picking them out. Please also do not digging the mudflat too deep to hurt the seabeds .