The culture heart of Philly 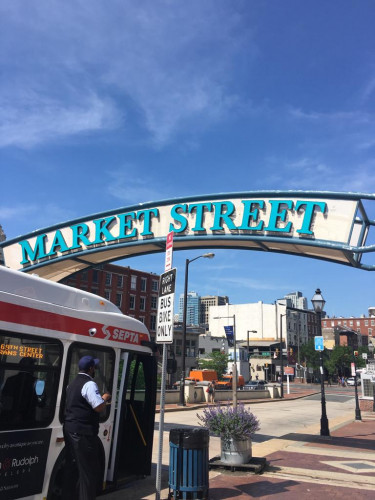 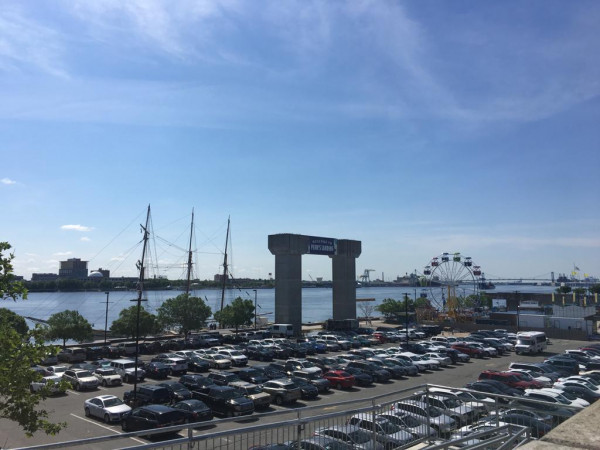 Penn’s landing is the spot where William Penn actually landed in 1682. There are lots of things to see and do. There are plenty of cafes and food booths offering food and ice cream, a museum, a historic warship and submarine and even the Sugar House Casino.

At certain times of the year, there are fireworks displays. There are hammocks to rest in, swan boats to paddle out on to the Delaware, and a skating rink. In the summer there are concerts. A great place for families with children. The Great Plaza hosts multi-cultural festivals, such as the African festival and the music, food and items sold by vendors were fantastic. Definitely something for everyone. 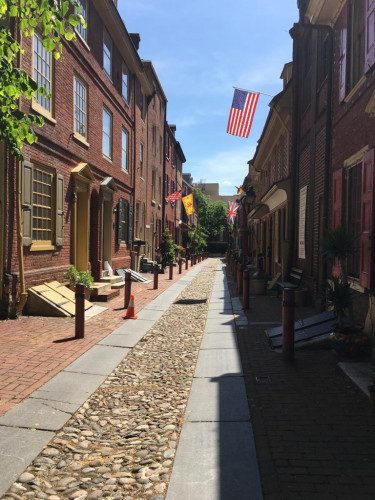 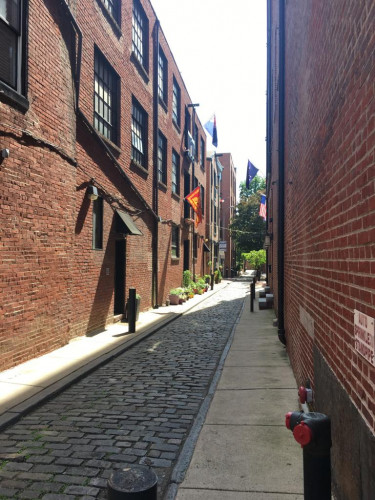 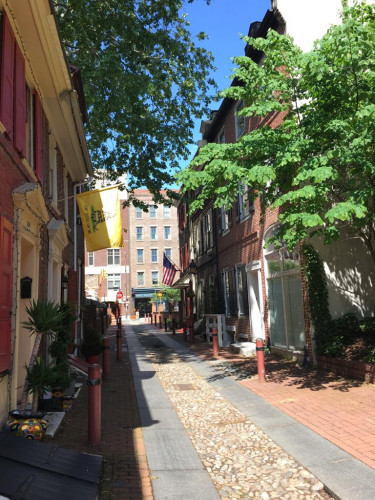 This street is the country’s oldest residential street with the houses preserved and still inhabited! The house at the corner with red door and shutters is circa 1703 and is still a home for someone. The street is lovely with bricks, each house well maintained with various flags flying from homeowners.

This street is also easy walking to many historical sites as well as eateries, coffee shops, boutiques and art houses. The historical sign is at the entrance to the street. Worth a visit! 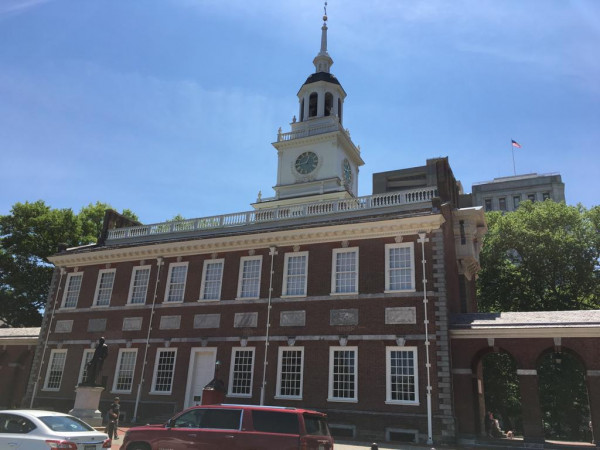 As an important part of American History, the Independence National Historical Park is an important stop when visiting Philadelphia. However, the park includes more than a dozen buildings and spaces to visit and can be confusing.

The Liberty Bell is also a must see but the Liberty Bell Center (where the bell is located) does not require a timed ticket and can be viewed every day that the park is open. The Visitor’s Center and associated gift shop located in a separate building is nice yet a bit underwhelming.

One area that could be improved upon in the future. Independence Hall (with ticket) and the Liberty Bell Center are the key and most historic sites at the park. 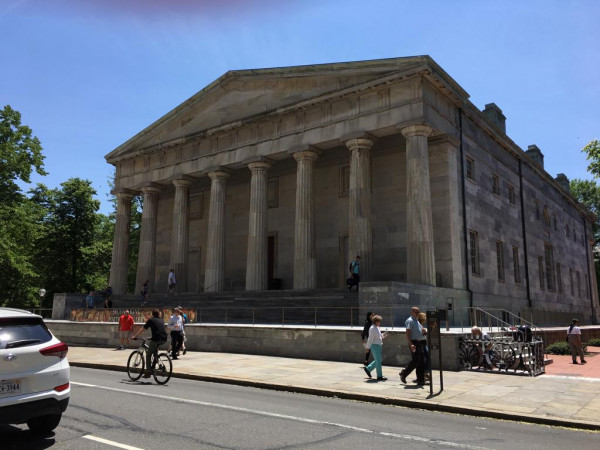 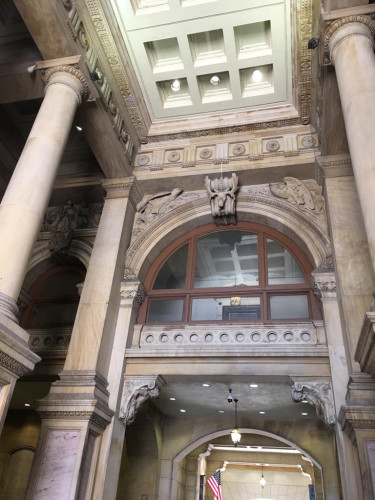 You can sign up for tickets in advance on the National Park Service website. If the tickets are sold out don’t fret; you can go on the day of your visit and get free tickets. Just go to the Visitor’s Center (just north of the Liberty Bell building) and get the walk up tickets. We got there in the morning and was able to get in to the tour. Of course as the weather gets warmer you’ll need to get in line sooner or go to a later tour. We got to security a half hour before our tour time. You have to remove everything from your pockets and take off your belt.

Once inside you wait until a volunteer puts you in a holding area about 20 minutes or so before your tour. Until then you can roam around the grounds. There are other buildings you can see also if you want to go through security early.

The volunteer gives you some admin info and takes you into a small room in the building next to IH. The ranger comes in and give you some background. Then you go in and spend a few minutes in the room on the right. Then you spend a few minutes in the main room where they debated the Declaration of Independence and the Constitution. The ranger gave history and insight. It didn’t feel rushed at all. There was plenty of time for pictures.

Total time from the ranger start to finish was roughly 25 minutes. It went quick but you didn’t feel like you were being pushed through. The ranger stayed to answer questions.

The Liberty Bell is a free site to visit. You do not need tickets to get in. The day we saw it in May, it was about noon and very chilly so there were not many people. Yay! We just walked right in (you do go through security) and were able to take some nice photos and just enjoy looking at it and thinking about the historical significance.

There are some exhibits in the Center, but we mainly came to see the Bell. We were able to walk all around it and take various photos. If you want to see everything, just make sure to stop at the Visitor’s Center first so you have tickets if you need them. 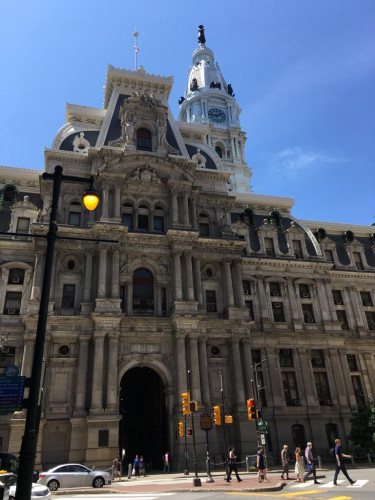 This is a very unusual tour of a wonderful historic building, and the tourguide was just great at telling anecdotes and very relevant events in various of the large public receptions rooms. This building is truly a treasure and it has been restored at great expense which is quite worth it! The desk staff are quite friendly and accommodating, and recommended that we go across the street while waiting for the tour to start so we could hear the pipe organ recital at noon at Macy’s that was formerly John Wanamaker’s store. Fantastic to have organ music filling what appears to be one of the landmark retail stores of the old fashioned enormous design. Also be sure to see the statue of the eagle right on the first floor, near the ladies’ shoe department. All in all a very nice visit. The City Hall is a fun and informative experience.

The Reading Terminal Market is housed in the former Reading Train Terminal. The Reading was 1 of 2 major train lines that brought people into and out of Center City.

Recently the management of the RTM has not renewed the leases of some of the mainstays. That sucks, but the new merchants are holding their own. At the RTM you can get prepared meals from around the world, or you can do your food shopping: cheese, meats, and bakery goods from the Amish; seafood; fresh fruits and vegetables; kitchen goods; goods made in PA; local ice cream; and the list goes on. Of special note: the best sandwich in the US as voted a few years ago is at Dinic’s in the RTM. Go early if you want a seat; the line starts around 10:30.

My only criticism of the Market is something they can do nothing about. It is very close to two large businesses: The PA Convention Center and the Criminal Justice Center. As such at lunchtime the RTM is full of people visiting those businesses plus tourists. They are mostly gawking (and trying to figure out the food choices), so as a native I get annoyed that I cannot get from place A to place B to get my shopping done.

Is it worth it? Absolutely. The prices are usually lower than at a grocery store, and they are usually fresher, too. In addition, many places offer senior discounts plus juror discounts. Maps are available of the Terminal at the entrance on the 12th street side closest to Filbert Street entrance.